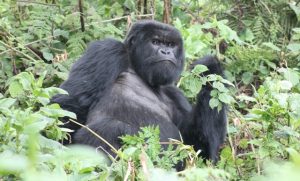 For a very long time the Big Five animals have been; Elephant, Lion, Leopard, Rhino & Buffalo. This big five do not have any scientific relation. But rather it is a list of 5 animals that trophy hunters back in the day categorized as the most difficult and dangerous animals to hunt, hence most prized. Since then, safari goers have had these massive animals on top of their lists of must see animals…

World photographers, conservationists and charities have come up with a another set of big five, the New Big Five, which highlights what they find as some of the most spectacular & critical species of the animal kingdom. Yet the existence of these 5 animals is threatened thus the need to draw attention to them. The conservation of these animals is key to the survival of many other species in the ecosystem.

The gorilla has made it on this list. https://www.newbig5.com/results/

The gorilla is the biggest of the great apes and yet its population has been dwindling to near extinction. Many travelers visit Rwanda for the gorilla trekking expedition for the chance to see these massive primates. Gorilla trekking can also be done in Uganda and the Democratic Republic of Congo. Encountering the gorillas is one of the most epic wildlife experiences and a photo of these gentle giants brings out their amiable character that attracts more travelers thus driving the need to conserve. The gorillas share their habitat with an enormous biodiversity whose survival so much relies on the conservation efforts directed toward the gorillas.

Other animals on the new big five:

Unlike the original big five that you could find all on your African safari, the new big five is spread across the world. The three of the new big five can be encountered on a safari in Africa. These are Gorillas, Elephants & Lions. Tigers can be found in museums. Two tigers were introduced at the Uganda Zoo.