The Ssese Islands is the most popular getaway destination in Uganda. The Ssese is a collection of 84 islands located on Lake Victoria. Some islands of Ssese have been developed for tourism, with beautiful sandy beaches, cozy beach hotels, boat cruises, wildlife trails which visitors can take to and observe nature, and enjoy the best fish which you catch from the lake and roast in the evening. The best developed island is the main Bugala Island that has nice beautiful, the most popular being the Brovad Sands Beach Hotel, and a forest for nature walks to spot monkeys and other wildlife. Ssese Islands can be reached by a ferry from the shores at Entebbe to Bugala and it is a 3 – 4 hours

Bulago Island is arguably the most beautiful island on Lake Victoria, and is also one of the most accessible from Kampala. It located about 2 hours boat ride from the shores at Ggaba Kampala. The Island has excellent beach hotels and the best beaches. Bulago is perfect weekend getaway more so for couples who just want some time to themselves away from the noisy city! Popular hotels include the Pineapple Bay Resort.

Ngamba Island is a small forested island 100 acres is located in Lake Victoria, 45 minutes boat ride from shores in Entebbe. The island has a chimpanzee sanctuary with over 40 chimps, and is a popular spot for day visits to watch chimps for an hour. The island is also a wonderful place to retreat for a weekend and spend relaxing time on the shore of lake Victoria, watch birds, and can also participate in the caretaker programs. Nice accommodation is available

Mabira forest is the biggest forest in central Uganda. It is well situated along the Kampala – Jinja highway and can be reached within an hour’s drive from Kampala. A weekend spent at the Mabira Rainforest Lodge in the heart of the forest is a rewarding experience. Immerse in the tranquility and feel close to nature with the sweet songs of birds and chattering of monkeys and different noises of the forest. While in Mabira you can set out on walk in the forest and observe nature, glide through the forest canopy via the Zip line at the griffin falls!

For travelers that want to go on a short wildlife safari in Uganda, say 2 – 3 days, there are two primary choices of parks or destinations to choose from, they are; Murchison Falls National Park and Queen Elizabeth National Park. These two parks are the obvious choices if you want to explore the bush to watch wildlife but have just a weekend or a couple of days.

So, quite often travelers want to know which park they should visit for the best safari experience in Uganda.

Many of the animals most sought after by the safarigoers can be found in both parks such as lions, elephants, buffaloes, hippos, etc… Both parks have many similar activities such as game drives, boat cruises and chimpanzee tracking, etc…

In this blog I compare Murchison falls and queen Elizabeth national parks, and highlight where they differ and which one may give you what you are looking for in the safari.

Most travelers have found Murchison Falls national park to give a better game drive experience than Queen Elizabeth national park. The game drive session in Murchison Falls lasts up to 4 hours due to longer game drive tracks hence you will most likely spot more types of animals in a morning game drive session. It is also easier to find most animals in Murchison Falls National Park, because, the park is divided by the River Nile into the north and south parts, with the north having the savannah grasslands and therefore hosting higher concentration of animals. Game drivers are therefore done in the northern part of the park.

Meanwhile game drives in the game watching area of Queen Elizabeth National Park called Kasenyi plains last about 3 hours and you will have exhausted all the possible sightings there. Drive tracks are still limited in the park otherwise the park is quite rich and diverse.

Elephants are present in both parks, however on a lucky day Queen Elizabeth National Park can provide incredible sightings of big herds and massive tuskers.

Lions and other cats – which park provides the best chances of seeing lions, leopards, hyenas.

One of the reasons travelers decide to include both Murchison Falls and Queen Elizabeth National Park in their itineraries is to increase the chances of spotting Lions, and may be other big cats like the leopard and hyena. However, what if you can only visit one park, which park will give you the best chances of spotting the lions??

This is a tricky question because lions and generally cats are very unpredictable in the wild because of their small numbers and wide territories. There is no guarantee seeing them, because nature is nature… Today you can be lucky and find a big pride of lions in the open near the game drive trucks, and tomorrow they could be in a thicket a few meters from the drive track but you can’t see them.

So, lets say chances of seeing lions in either parks is about the same.

For guaranteed sighting of lions, Queen Elizabeth National Park has a lion tracking activity where you join a researcher to track lions under study that are fitted with tracking collars. If you do not want to miss the lions, then book this activity to see the lions.

Murchison Falls National Park is found to give better chances of sighting the leopard, which is perhaps the most elusive big cat.

Meanwhile Queen Elizabeth National Park is hyena country, if you don’t see them during the day your night in the park will be filled with their ‘wailing’ calls.

Both Murchison Falls National Park and Queen Elizabeth National Park have a boat safari activity, a unique highlight of wildlife safaris you cannot find in many safari destinations in Africa. The boat safaris in the parks give great sightings of water wildlife such as hippos & crocodiles as well as up close views of other big game that come to drink and cool off, such close views you cannot easily get on a game drive.

The round boat trip on River Nile in Murchison Falls National Park is longer lasting up to 3 hours, and a variety of wildlife is spotted along the river and the banks, however the biggest highlight is perhaps going to the bottom of the spectacular Murchison Falls, the world’s biggest waterfall. You can also continue off the boat and take the incredible hike to the of the Murchison Falls which starts from the bottom of the falls, giving you incredible views of the waterfall as you hike along it to the top.

The boat cruise on the Kazinga Channel is shorter, the round trip lasting up to 2 hours. However the channel’s flat banks host a higher concentration of wildlife than the Nile banks which has lots of high cliffs. Other than hippos and crocodiles, buffaloes, elephants, and antelopes are sight on several spots along the channel banks. And for the bird lover, the Kazinga Channel is simply a heaven as hug flocks of water birds, especially wintering birds gather at the channel banks creating such a spectacle of birds. 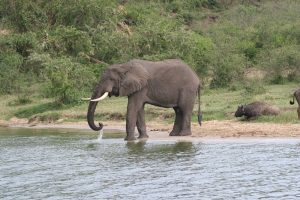 Chimp trekking – which park will give you better chimp experience

Chimpanzee trekking is one of the top things to do in Uganda and in case you wish to squeeze this thrilling adventure into your short safari know that both Murchison Falls National Park and Queen Elizabeth National Park are home to chimps that have been habituated for the experience.

Which would be the best park to combine a big game safari and chimp trek?

Meanwhile, Queen Elizabeth National Park is home to a small population of chimps in Kyambura Gorge forest. Kyambura does not provide good chances of seeing the chimps (50/50), however this unique forest is located in a gorge and is popularly referred to as an underground forest. The trek in the gorge provides one of the most exhilarating forest walks you will ever have. You take in the amazing scenery and a chance to encounter some rare wildlife such as the giant forest hogs. For better chances of seeing chimps when you visit Queen Elizabeth National Park you can do the chimp tracking in Kalinzu Forest which is located less than an hour’s drive from the park. Kalinzu forest has more chimps than Kyambura and gives way higher chances of seeing chimps.

Extra activities you can do – which park will give you a chance to explore more activities in and near the park?

The most popular extra activity to combine with a safari to Murchison Falls National Park is the rhino tracking at the Ziwa Rhino Sanctuary which is situated along the way to the park. If you dream of ticking off all famous “big five”, a stop over at the sanctuary will give you the first big five and you will look forward to tick off the leopard, lion, buffalo, and elephant in Murchison Falls.

On the other hand, Queen Elizabeth National Park is great for community and hiking activities. Queen Elizabeth National Park is a biosphere with parts of the park shared between wildlife and humans living in harmony. You can visit a community to experience they traditions and lifestyle, visit a fishing community, salt mining community, etc… The park is also located in the shadows of the Rwenzori mountains that you can visit for a day hike as an extra to your wildlife safari.

Decided on where to go, below are some safari trips to either parks that you can pick from;