The gorilla ticket is purchased many months in advance before the gorilla tour and one becomes tied to the trip because of it.

However, a concern for many travelers is what happens if they cannot make it for the trip or trek due to unforeseen issues? Is the gorilla permit/ticket refundable? Can it be rescheduled? Can I resell it?

Below I discuss about cancelling the gorilla tracking permit

Here is the cancellation and refund policy by the Uganda Wildlife Authority which is body of the gorilla trekking tickets in Uganda:

Cancel 91 days and above to trekking date – 70% refund

What happens I travel for the gorilla trek and on the day of the trek I wake up and cannot trek because of a sickness or injury? Do I lose it all?! No you don’t lose it all

If on the day of the trek you are unable to join the gorilla tracking because of the an injury or a sickness, especially if you catch a contagious disease that can put the gorillas at risk, you can be refunded 50% of the ticket.  You will have to report to the park office a day before or early in the morning of the trek. You will be required to present a doctor’s report for processing your refund.

Can I instead reschedule a gorilla trekking ticket and come another time?

Once you have bought a permit, you are allowed to reschedule it once to a new date as long as there is availability on the new date.

Can I resell the gorilla tracking permit?

This may be the best option if you are cancelling and planning to come another time. You can resell your permit if there is demand on your dates. However, this option is easier if you have booked your ticket or tour through a local tour agent who would easily sell to another tour agent or would know if someone is looking for a ticket on your cancelled dates.

Nearly every traveler’s dream is to tick off all the famous Big 5 animals (Lion, Leopard, Elephant, Rhino, Buffalo) on their safari trip in Africa. Uganda is one of the countries that offer this possibility, having all these animals in many parks and wildlife reserves. And, being home to the mountain gorillas, a safari in Uganda gives you the chance to see the Big Five and the famous Mountain Gorillas – two of the biggest highlights of an African safari holiday.

However, one wonders what the chances are of seeing the big five animals in Uganda and which destinations have the best chances to see particular animals

The Rhino is the least widespread of the Big Five and the most endangered mostly because it is highly poached for its horn.

The rhinos in the wild in Uganda are found in only one destination, that is, the Ziwa Rhino Sanctuary. The sanctuary was started in 2015 as a program to reintroduce the rhinos back into Uganda’s wilderness after they were poached and wiped out during the insurgencies of the 1970s. The fate which befell many rhinos in Africa. The rhinos have been thriving on the sanctuary and from the 13 White Rhinos that were originally introduced have since multiplied to more than 30 rhinos.

The sanctuary offers a guided rhino tracking activity for tourists to see the rhinos on foot. You therefore are guaranteed to tick off the rhinos in Uganda when you visit the Ziwa Rhino Sanctuary.

Note, there are NO Black Rhinos in Uganda at the moment.

A safari is not complete without seeing the “King of the Jungle”, the Lion. It is therefore the most sought after Big Five animal.

If you ask which park will give you the best chance of seeing lions in Uganda? First of all, none of the parks guarantees seeing the lions on a normal game drive. But if you visit at least two of the parks there is a high probability you will see them at least in one of the two parks.

Murchison Falls National Park offers slightly better chances to see the lions. The park is also located in the same direction and close to the Ziwa Rhino Sanctuary, so the shortest tour to see the all the big five in Uganda is combing these two destinations in a 3 days Murchison Falls tour with rhino tracking. 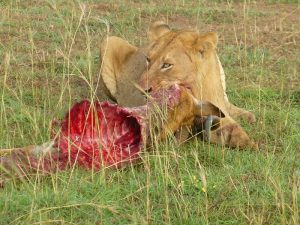 Queen Elizabeth National Park is famous for the tree climbing lions and is one of the few parks in the world where lions have developed this unique capability to climb trees like leopards. Queen Elizabeth National Park also offers a lion tracking activity where tourists join researchers to monitor collared lions. You should include lion tracking in your itinerary if you want to guarantee seeing the lions during your safari vacation in Uganda.

Leopards are arguably the most widespread of the big five and yet the most difficult to find. They live in most of the parks and wildlife reserves across Uganda. They are very solitary and stealth, and a sighting is by pure luck. The savannah parks have provided the best chances to see leopards in Uganda, and one park in particular is the Lake Mburo Park which is the smallest of the savannah parks. For better chance to see the leopard you should do the night drive when leopards are most active. All savannah parks allow a night game drive.

Buffaloes are a constant sighting in all the savannah parks in Uganda.

Kidepo Valley National Park is the undiscovered safari gem of Uganda. Because of its location in the far north eastern corner of Uganda that was previously very difficult to reach and is surrounded by what are perceived as a hostile people, the Karimojong, very few people have taken the trouble to go and discover this beautiful wilderness. Most people would rather take a tour to Murchison Falls Park – Uganda’s biggest & most popular park which is great for wildlife safaris, but with little more endurance on a longer drive farther north east they will discover an unspoiled wilderness with no crowds but lots of wildlife including that which cannot be seen in other parks of Uganda such as the cheetah and ostrich in addition to common wildlife such as lions, zebras, giraffes, buffaloes, elephants, antelopes, etc…

Below are the entry fees for Kidepo Valley National Park and the pricing for the activities and park accommodation.

Park entry fee is valid for 24 hours from the time of payment.

The opens at 7am and closes at 7pm. Beyond that no one is allowed in the park, unless they have booked a night safari drive with the park.

Car entry fees are valid for 24 hours from the time of entry.

Hiking fees do not include hiking equipment.

Lake Mburo National Park is actually an overlooked gem of a safari destination. It is a small park that is easy to explore even on a self-drive. Available animals are in plenty, it has fewer predators which has allowed other animals to thrive in big numbers. The scenery is one of the best you can experience. There are many activities to do. But the biggest advantage of all is that it is the closest park to Kampala and Entebbe, about 3 – 4 hours drive, meaning you could even visit it in one day, or can arrive in Uganda in the afternoon and immediately go to the park.

Below are the entry fees for Lake Mburo National Park and the pricing for the different activities you can do in the park.

Kids below 5 years to do not pay entry fees

Park entry is valid for 24 hours from the time of entry into the park.

The park opens 7am and closes at 7pm

Like tourist entry fees, car entry fees are also valid for 24 hours from the time of entry.

Rates do NOT include entrance fees and other activity fees