Lake Mburo National Park is actually an overlooked gem of a safari destination. It is a small park that is easy to explore even on a self-drive. Available animals are in plenty, it has fewer predators which has allowed other animals to thrive in big numbers. The scenery is one of the best you can experience. There are many activities to do. But the biggest advantage of all is that it is the closest park to Kampala and Entebbe, about 3 – 4 hours drive, meaning you could even visit it in one day, or can arrive in Uganda in the afternoon and immediately go to the park.

Below are the entry fees for Lake Mburo National Park and the pricing for the different activities you can do in the park.

Kids below 5 years to do not pay entry fees

Park entry is valid for 24 hours from the time of entry into the park.

The park opens 7am and closes at 7pm

Like tourist entry fees, car entry fees are also valid for 24 hours from the time of entry.

After finalizing all planning for the trip to Rwanda to see the gorillas in the Virunga mountains, chimpanzees in Nyungwe forest and take a safari trip to see the big five in Akagera national park, the last question asked, or topic of discussion is often about tipping.

Below I shall guide on the question of tipping in Rwanda

Should I tip in Rwanda? It is not mandatory, but you should

First of all, tipping is not mandatory in Rwanda, and you will not receive an awkward look if you walk away after receiving a service. In a nutshell, the culture of tipping does not exist in Rwanda or has not picked up for most people. Tipping is there left to your discretion.

However, a tip goes a long way in uplifting an individual, as the ordinary person in Rwanda earns a small monthly wage that he or she can barely survive on. It is therefore advisable to tip, and therefore plan to have a tipping budget when you travel to Rwanda.

Next question is, who should I tip?

You have so many people along the service chain, but may be not everyone deserves the tip. The persons you interface with the most and those who visibly put in the effort to see you are satisfied with a service deserve the tip. Some of the people on your service chain include; waitresses & waiters, drivers, guides, and porters

Now the most important question is, how much should I tip?

Most travelers coming from a tipping society know that they have to tip, but their question is how much should they tip?

You can tip as much as you can afford depending on how you are satisfied with a service.

Here is a guide on how to tip for the different personnel you might have on your service chain during your trip in Rwanda.

Waiters, waitresses and other support staff at the hotel can be tipped $5

Alternatively, you can change some dollars to Rwanda Francs and a tip from 1000 – 3000 Rwanda Francs is very decent. That is less than $5 but with good value in Rwandan currency.

Guides at local sites such as museums can be tipped $10.

Meanwhile activity guides such as for gorilla trekking, chimpanzee trekking, hiking, etc… can get the biggest tip of $20+ because of the enormous work they do and direct contribution towards conservation.

Tour drivers are persons who spend with you the most time and share with you a wealth of information about different destinations. They also ensure you are safe all the time.

Porters are hired at $10 when trekking to help carry your backpack and provide a push or pull were necessary. At the end of the trek you can tip them an extra $5 depending on how much more help they would have provided than just carrying the bag.

Rates do NOT include entrance fees and other activity fees

Volcanoes National Park is the most popular of Rwanda’s national parks because of the gorillas and the gorilla trekking experience.

The park is located in the north of Rwanda and protects a part of the Virunga Mountain range that extends in Rwanda. Volcanoes National Park has 5 of the volcano mountains of the Virungas, and these are mountains; Muhavura, Gahinga, Sabyinyo, Bisoke, and Karisimbi.

Volcanoes Park is the ultimate destination for active travelers in Rwanda as it offers great trekking opportunities on the volcano mountains.

The most popular of activities in Volcanoes National Park is the gorilla trekking or tracking. This is also the signature tour of Rwanda as most travelers visiting Rwanda come to see the mountain gorillas as it is one of the only three countries in the world where they can be seen in their home.

The Dian Fossey trail hike is one of the not so difficult treks in the park that provides a good chance of seeing more in the Virungas. The trail is located in the valley between mountains Bisoke and Karisimbi and on this trail, you can see the rare mountain plants, wildlife and a good chance to see gorillas. The Dian Fossey trail hike is often done in preparation for the gorilla trek to learn about the person who dedicated her life in leaning and protecting the gorillas and died for them.

Golden monkeys are found only in the Virunga mountains. Their beautiful golden fur coats and active character make an encounter with them an exciting adventure worth adding to your trip in Rwanda.

The stunning golden monkeys are a photography delight, and full day photography of the monkeys is available charged at USD 1800 for three consecutive days

Mount Bisoke 3711m is the most popular mountain hiking destination in Rwanda. It has a large crater lake at the summit which is prize after a 6-hour hike. The hike on Mt Bisoke also provides a good chance to see gorillas on the trail as a number of gorilla groups live on this volcano. Golden monkeys will be seen during the hike. Mountain Bisoke is can be hiked by the experienced hiker and even those who are not avid hikers but some fitness.

Mount Muhabura or Muhavura (4127m) is the second highest of the Virunga volcano mountains. And as such, the day hike on Mt. Muhavura is mostly done by the hiking or mountain climbing experienced who want something a little more challenging in day hike than what the popular Mt. Bisoke can give. It is there not a popular mountain for day hikes. Mt. Muhavura will also reward you with a crater lake at the summit, though smaller than that of Mt. Bisoke

Mount Gahinga (3473) is the shortest of the volcanoes in the Virunga mountains in Rwanda. It is not a popular mountain because it does not have much, no crater lake at the summit to look forward to. However, it still offers a great experience of the Virunga mountains, with great views of the mountain range and rolling landscape around. Mt Gahinga is a great option to fall back to for those who love a hike in the Virungas but do not think can take on the tougher hike on Mt. Bisoke and Muhavura.

Note the above pricing does not include camping equipment (tent, sleeping bag) and meals. There is only a camping site for you to establish your tent.

This is a brilliant alternative to the Mt. Karisimbi 2-day hike for those who want overnight in the Virunga mountains.

Note the above pricing does not include camping equipment (tent, sleeping bag) and meals. There is only a camping site for you to establish your tent.

For those who can not take on any of the above hikes and treks but want to explore the Virunga mountains a little bit, a trail along the edge of the forest in the base of the mountains is available that you can take to look at some of the wildlife, enjoy views, and by chance could bump into the mountain gorillas. This is a good option planning a birding trip in Volcanoes as there is not established birding activity in the park. The nature walk is 1 hour long.

Planning a trip to the Volcanoes National Park, below are trips you can look at with some of the above activities: 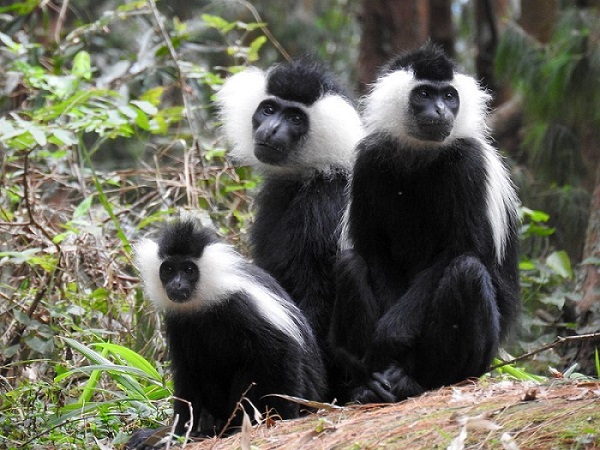 It is a beautiful wildlife adventure approaching a large group of these colobus monkeys and watching these lovely monkeys that are very active and social, that do a lot of playing with each other and grooming when they are not swarming branches of a fruiting tree, or lining up on the bark and branches of an old tree to eat off the lichens, or covering an entire lush green ground in black and white when they come down from the trees to eat some herbs and clay.

One of the two habituated groups is a supergroup of 500+ colobus monkeys and their territory is in Uwinka which is also the location of the park’s visitors’ center or head office.

The second group of habituated Colobus monkeys is not a supergroup with a much smaller number of monkeys of about 60 individuals. This group is located in Gisakura area.

The Gisakura group is the most visited for the trekking trips because it is easier to find without much trekking, and often the monkeys are hanging out near the edge of the forest. Gisakura (outside the park) is also the location for most lodgings used for stays when visiting Nyungwe National Park for trips, such as Nyungwe Top View Hill Lodge, One&Only Nyungwe House, and Gisakura Guesthouse among others. As such it is very conveniently located.

The Gisakura colobus monkeys group have four trekking schedules each day; 8am, 10am, 1pm, 3pm. This group is therefore the most suitable if you want to add a short extra activity to chimp tour in Nyungwe National Park.

The Uwinka colobus group have one schedule in a day at 9am because the experience can take a full day depending on where the monkeys would have traveled to. Unlike the Gisakura group that can be done as an extra activity on the same day with another activity in Nyungwe, the Uwinka group needs a day of its own allocated.

The Uwinka group is great if you want to spend a full day of photography with the colobus monkeys in Nyungwe National Park.

Cost of the colobus monkey tracking in Nyungwe National Park

Age limit: Only persons aged from 12 years are allowed to do the colobus  monkey tracking, below this age a person is not allowed to join the walk.

600USD per group per day

After one day, additional days are paid 50%

Level of fitness required for the colobus monkey trekking in Nyungwe

Basic fitness is okay enough if you are visiting the Gisakura group. However if you are planning on tracking the Uwinka group you need to be fit as there may be a lot of hiking up and down hills and through think vegetation.

The monkey trek can be done throughout the year. However the drier months (dry season) is the most favorable fore trekking which is December to February, and June to mid-September. During the rainy seasons, April – May, and October – November, the terrain is slippery hence a more difficult trek.

What essential items do I need for the colobus monkey trek

Would you like to see the Colobus monkeys in Nyungwe? Well you can book one of these trips