World Migratory Bird Day (WMBD) is a day that is dedicated to migratory birds awareness and in this year 2021 it has been celebrated on 8th May. Migratory birds are faced with challenges along their migratory paths such as hunting, poisoning, and degradation of stopover points. WMBD in Africa is helping to sensitize the local population about the migration of birds and many locals are surprised to learn that many of the birds they see during certain times of the year are visitors coming from as far as Europe. The people are sensitized on the importance of the migratory birds, and the need to conserve them and their habitats. 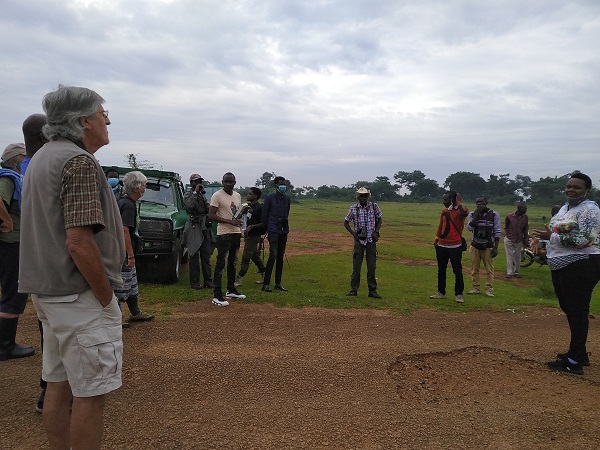 Uganda, which hosts many Palearctic & Afrotropical migrant birds, joined the rest of the world in recognizing and celebrating the World Migratory Bird Day. The day was well attended by several groups and individuals with Nature Uganda taking the lead in coordinating and organizing the day’s activities intended to draw attention to the migratory birds.

Nature Uganda organized a birding excursion to Lutembe Wetland on Lake Victoria which is one of the 9 Ramsar sites in Uganda. There would not have been a better place than Lutembe wetland for this day because the wetland hosts many migrant birds but it is also under immense threat for destruction from encroachment and illegal activities. A lot of the habitats around the wetland have been razed for agriculture and settlements, and commercial flower growing along the lake shore has seen dangerous chemicals being released into the wetland.

We met up at Lutembe early in the morning. Among the participants included Ugandan bird guides and tour operators who benefit a lot from selling birding in Uganda tours, members from the local community near Lutembe who take the lead in destroying or protecting the wetland, Civil Aviation Authority from Entebbe International Airport which shares the same ecosystem on Lake Victoria, and importantly students from university who represent the young and custodians of the future of conservation.

Birding at Lutembe covers water and land habitats and therefore the group was divided into two, one group birding on water and another on land with the two groups to meet later and combine one list. 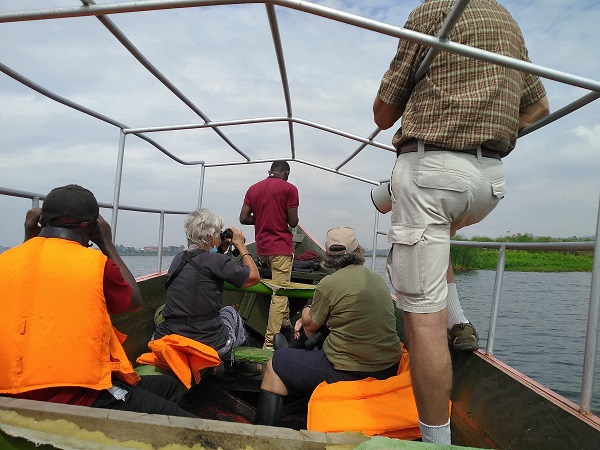 Personally, I wanted to see what gulls, terns and other migrant water birds were still present given that many Palearctic migrants have already left by April, so I decided to join the water group. We set off in a motorized canoe and we birded the fringes first, scanning the papyrus where we spotted many Northern Brown Throated Weavers, and Swamp Flycatchers, Village Weavers, Striated Heron, Malachite Kingfisher, a Sedge Warbler (a Paleartic migrant), Purple Heron, Yellow-billed Ducks, White-faced Whistling Ducks, and Long-tailed Cormorants. We even heard the elusive Papyrus Gonolek and played its call but it refused to come out of hiding. We proceeded to the small islands of mudflats and found small flocks of Grey-head headed and Black-headed Gulls were still present, in addition to Whiskered, White-winged Terns and Gull-billed Terns, Common Ringed Plovers, Common Greenshank, Little Egrets, Great Egret, Great Cormorant. The highlight for the group was witnessing the Osprey diving for a fish that it struggled to fly away with as it was quite sizeable.

Once we returned after two hours birding on the lake another shift from the lake group set out into the lake but a few minutes later it started pouring and interrupting the day which started off so well… The heavy downpour didn’t stop for several hours and unfortunately brought at an early end to the World Migratory Bird Day activities at Lutembe.